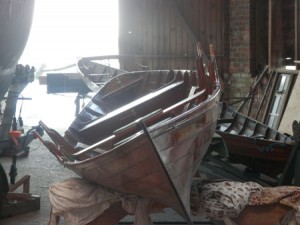 This delicate traditional Thames Skiff was built by Ashley of Pangbourne, the level of craftsmanship in a craft like this really strikes a chord in me. Thomasina belongs to the Thames Traditional Boat Society, we had agreed to replace the stem and sternpost amongst other things.

I believe that many features of a skiff like this, and the way they were built, characterize their Nordic ancestry.

Success replacing the stem, relies on the patience and care spent carefully opening up the planking that was fastened together over 100 years ago. I always feel like a bit of a time traveller on these occasions. The oak stem would have been cut from a tree at least 100 years old, so that would have been growing during the reign of George III.

Similarly,the board of Sussex oak I bought to cut the new stem, would have come from a an oak that was a young sapling when Thomasina was being built on the Thames.

The stem on a skiff like this doesn’t really have any rebate for the ends of the planking, instead the plank ends are bevelled off to meet the stem. This is in common with Norse boatbuilding, the only other boats in the UK that I know share this feature, are the craft built around the Shetlands.

It would be nice to think someone could be changing Thomasina’s stem again in another 100 years. I always take patterns and measurements of boats like these so that I can replicate the detail and finesse of these craft in my own work.